This new song of Golu Gold is getting a lot of love from Bhojpuri fans.

Recently, the new song of Golu Gold has rocked on YouTube. The name of this song is ‘Duno Headlight Hilela’. The song seems to be double meaning listening but it is getting tremendous response from the audience. The song has over 9 lakh views in 2 days. Watch Video …

GOLU GOLD | Duno Headlight Hilela | Dunno headlight Hillela | Antra Singh Priyanka | Ft. Mahi Shrivastav | Superhit Bhojpuri Song | Bhojpuri Cinema Industry consists of singers who rule Bhojpuri cinema with their unmatched songs. Arvind Akela Kallu, Ritesh Pandey, Ritesh Pandey, Samar Singh, Pramod Premi Yadav, Rakesh Mishra, etc. Singers have taken great name in the industry. One of these is a Bhojpuri singer named Golu Gold. Golu Gold is not an identity in the Bhojpuri industry. Many of his songs have become super hit. Golu is undoubtedly the Bhojpuri industry’s gold by his name, but the price of this gold (Gold Price) only goes up and does not come down.

Recently, his new song has been rocking YouTube. The name of this song is ‘Duno Headlight Hilela’. The song seems to be double meaning listening but it is getting tremendous response from the audience. This superhit song of Golu Gold was released on April 3, but in 2 days, the song has got more than 9 lakh views. The song has 905,078 views till the time of writing the news. While people are listening to this song because of Golu Gold, it is also being seen a lot because of Mahi Shrivastav. Mahi Srivastava is seen in a very hot avatar. Sometimes she is seen wearing a lehenga and sometimes she is seen in shorts. 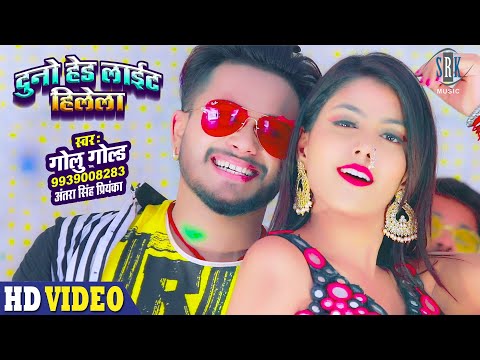 Golu Gold’s song ‘Duno Headlight Hilaela’ is sung by Golu Gold and Antra Singh Priyanka in his melodious voice. Antara is a well-known singer of Bhojpuri cine world. People like his songs very much. Let us tell you that the music of this song of Golu Gold has been given by Arya Sharma while the lyrics are from Arun Bihari. The videos of the song are Direct Sushant Singh and Kumar Chandan and the editor is Prashant. The song’s Doopy has been handled by Bunty Raj, while Golu Gold and Mahi Srivastava have been decorated with makeup by Vicky Raj. Alert: Now OPT on mobile is not safe, even hackers are stealing data from SMS

Satanic wise: know for whom Anand Mahindra said this by sharing the video